Robert and Joan Bowling didn’t plan on hosting international students, but they wouldn’t have it any other way.

Excerpt from The Steward School Colonnade

When Robert and Joan became “empty nesters,” they welcomed this new chapter with open arms!

“We had four kids—we’re a Brady Bunch family, married 18 years, so when they were all out of the house, we were like, ‘Woo hoo!’ Nachos, light beer, and Reese’s cups for dinner… yeah! Watch all-night movies…sure! And then we bragged about it to the wrong friend,” Mrs. Bowling said. 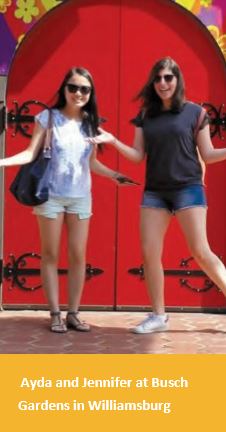 Mrs. Bowling’s friend, an exchange coordinator, immediately suggested an alternative use for those extra rooms!

“She said, ‘You have three spare bedrooms. Would you consider…,'” Mrs. Bowling said.

Over the years, the Bowlings have welcomed a total of 4 students into their home: Jennifer Xu from China, Sophie Massier and Ayda Asghar Afshari from Germany, and Emilia Aguilera Rodriguez, who they’re currently hosting from Spain.

While it wasn’t originally in the plans, hosting as an “empty nest couple” has been rewarding for all involved!

“It’s been great exposure for us as well as these kids,” Mr. Bowling said. “We’ve been exposed to [the cultures of] China, Germany, and Spain, and there’s new energy being infused into the household.”

To learn more about the Bowling family hosting adventures, check out the full article HERE in The Steward School Colonnade!